Classical Guitar Learning Centres near me 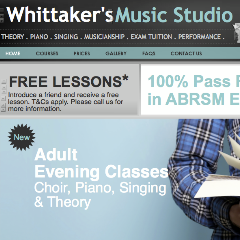 Classical Guitar Lessons Near Me

The classical guitar, also known as the Spanish guitar, is a member of the guitar family and is primarily used to play classical music. It is the predecessor of the modern day acoustic and electric guitars. The classical guitar is a string instrument that is made from wood and usually consists of six strings made from nylon.

The exact history of the classical guitar isn’t perfectly clear, however it is believed to have originated from two other instruments - the vihuela and the baroque guitar. The first modern looking guitar appeared somewhere around the time of the Renaissance.

What are the differences between classical and acoustic guitar?

A common misconception is that classical and acoustic guitars are the same thing. For the untrained eye, it is easy to mix them up, both of them have a similar shape and consist of six strings. However, as similar as they are, they also differ from one another.

The main difference that most guitarists will quickly notice is that the strings are made from completely different materials. While the acoustic guitar uses steel ones, the classical guitar uses nylon strings. The second difference is the size of the neck. Classical guitars have wider necks with larger spacing between each string while on the acoustic one the neck is a lot smaller. There are also differences when it comes to the bridges of the guitars and the tuning pegs.

Last but certainly not least, the two guitars produce different sounds and are used in different genres. The classical guitar is mainly used to perform classical and Latin music while the acoustic guitar is more suited for more modern music like pop, rock and country.

Which guitar is better for beginners - classical or acoustic?

In reality both guitars are recommended for beginners. They’re good for learning the basics and getting used to string instruments. There is no universal right or wrong answer when it comes down to it, it all depends on your personal preference and what music you want to play.

Most people nowadays want to learn the guitar because they want to play their favourite pop or rock songs. If you’re one of those then an acoustic guitar is probably the best choice for you. You’ll have to endure a bit of pain until your fingers get used to the steel strings, but apart from that you won’t regret your decision.

On the other hand, if Spanish and Latin music is what made you want to learn the guitar, the only right choice for you is the classical guitar.

This question doesn’t have one answer. It all depends on your own approach. If you’ve decided to learn a musical instrument, you’re more than likely going to have to purchase one. There are plenty of very cheap classical guitars out there, however buying the cheapest one you can find isn’t always the best idea. You can find suitable guitars for beginners for around £150 - £300 if you do your research correctly.

Beyond that, finding a good teacher is always a great idea if you want to progress quickly. TutorExtra offers a wide variety of qualified tutors offering lessons starting at £15 and going up to £40 an hour.

Classical Guitar Learning Centres near me listed with TutorExtra UK